Forza Horizon 4 is a racing video game set in an open world environment based in a fictional representation of the United Kingdom, in a region that includes condensed representations of Edinburgh, the Lake District (including Derwentwater), and the Cotswolds (including Broadway), among others, and features over 450 licensed cars. The game features a route creator which enables players to create their own races. Players have the opportunity to buy in-game houses which unlock new items, cars and game-play perks. The game features a dynamic weather system that also depicts the change of seasons. The environment in the world will change depending on the season: for example, Derwentwater would freeze over in winter and allow players the ability to drive on the ice to reach areas of the game world that would be inaccessible during all the other seasons. The seasons are fixed across the game’s servers, meaning that all players will experience the same conditions at the same time.

Overview Forza Horizon 4 System Requirements PC – Can I Run It? 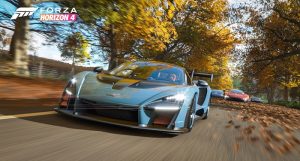 Can You Run It: Forza Horizon 4

Check if your PC meets the Forza Horizon 4 requirements with free, easy-to-use detection tools or enter your system specifications manually. Click the Orange button below to start with the test.