GTA 6 System Requirements PC Game. Can I Run It? Test your pc specs to find out if you pass the GTA 6 system requirements and learn more about the required Processor, Graphics Card, RAM and Storage.

GTA 6 System Requirements – About The Game

GTA 6 is currently a rumor for the sequel to GTA 5 (Grand Theft Auto V). There is not given a specific release date to us yet. Though rumors are telling the GTA 6 release date might be somewhere in 2024. GTA 6 will probably be released for Xbox Series X, Playstation 5 and PC. Though the PC version might come later than the console versions as Rockstar did it with the previous editions too. There have been several rumors about potential GTA 6 location spots, including heading back to Vice City or being set across the entirety of the US. That would be great, right?! For now, we’ll have to wait and wait and wait… 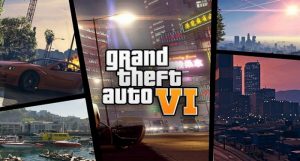 Check if your PC meets the GTA 6 requirements with free, easy-to-use detection tools or enter your system specifications manually. Click the Orange button below to start with the requirements test.

GTA 6 download is not available on Steam as we are waiting for a release date first. Though it will most likely be exclusively available at the Rockstar official website instead of Steam. Expected GTA 6 release date is 2024.