Marauders System Requirements PC – Check out the minimum and recommended Marauders pc requirements. Marauders Can I Run It? Read more below and test your pc specs to find out if you pass the Marauders system requirements.

Can I Run Marauders? Check it out below

Marauders is a tactical first-person multiplayer shooter set in an alternative 1990s where The Great War never ended, Earth has been industrialised to its breaking point, and many have fled to the stars. As space mercenaries known as ‘Marauders’, players will gear up and pilot their ships through hostile galactic reaches to salvage anything they can and survive by any means necessary. Throughout each match, players will be able to upgrade their gear on-the-fly as they uncover troves of loot from daring raids on hulking frigates and embark on tense touchdowns on moving asteroids. They’ll also have to keep a close watch for others looking to do the same and end their expedition with a bullet.

Overview Marauders Requirements PC – Can You Run It? 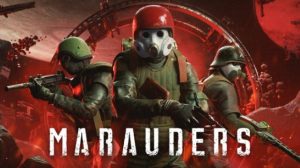 Can I Run It Marauders

Check if your PC meets the Marauders requirements with free, easy-to-use detection tools or enter your system specifications manually. Click the Orange button below to start with the requirements test.