Can I Run Skull and Bones? Check it out below

Skull & Bones is a tactical action game set in an open world environment and played from a third-person perspective. Players take control of a customizable pirate captain,and may choose to sail the Indian Ocean by themselves and set off on a single-player campaign, or gather up to five other players to ally in player versus player gameplay in Disputed Waters. Wind positioning can be assessed to gain an advantage in battle. Players may collect additional ships throughout the game, such as sloops-of-war, frigates and brigantines, whose weapons include mortars, broadside cannons, and rockets. Ships can be charged into with brute force and boarded. The rate of inflicted damage is gauged by the health bar. A core component is the multiplayer mode Loot Hunt, where two groups of players are challenged in treasure hunting to further accumulate their riches. Each given ship’s crow’s nest is scalable for use as a lookout point[2][9][10] and spyglasses can be availed of as well. Microtransactions will be an added feature.

Overview Skull and Bones Requirements PC – Can You Run It? 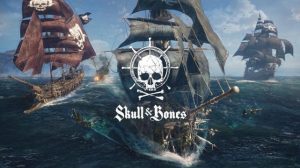 Can I Run It Skull and Bones

Check if your PC meets the Skull and Bones requirements with free, easy-to-use detection tools or enter your system specifications manually. Click the Orange button below to start with the requirements test.

Skull and Bones will be available on Steam in a later stage. Skull and Bones Release Date: 8 November, 2022. For more information visit the official website: https://www.ubisoft.com/en-us/game/skull-and-bones