Can I Run Turbo Overkill? Read more below

Heavily inspired by some of the all-time greats like Doom, Duke Nukem and Quake, with stunning cyberpunk visuals, Turbo Overkill is the most savage FPS ever released by Apogee. You play as half-metal, half-human, half-crazy Johnny Turbo, augmented with hidden arm rockets and a chainsaw that extends from your lower leg allowing you to kick-slice enemies wide open. In this Blade Runner-meets-DOOM hellscape, Johnny returns to his hometown of Paradise and finds its entire population possessed by Syn, a rogue AI, and its army of augmented minions. Desperate for enough money to outrun his past mistakes, Johnny takes on the impossible job of destroying the greatest AI ever created. Rival bounty hunters want to claim the prize first. Nothing is easy in paradise. 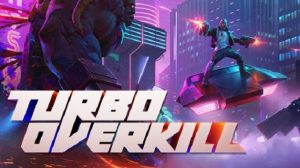 Can I Run It Turbo Overkill

Check if your PC meets the Turbo Overkill requirements with free, easy-to-use detection tools or enter your system specifications manually. Click the Orange button below to start with the requirements test.