Can I Run War Thunder? Read more below

War Thunder is the most comprehensive free-to-play, cross-platform, MMO military game dedicated to aviation, armoured vehicles, and naval craft, from the early 20th century to the most advanced modern combat units. Join now and take part in major battles on land, in the air, and at sea. 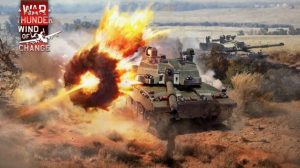 Can I Run It War Thunder

Check if your PC meets the War Thunder requirements with free, easy-to-use detection tools or enter your system specifications manually. Click the Orange button below to start with the requirements test.