GTA 5 System Requirements PC – Check out the minimum and recommended GTA 5 pc requirements. GTA 5 Can I Run It? Read more below and test your pc specs to find out if you pass the GTA 5 system requirements.

Can I Run GTA 5? Read more below

GTA 5 or Grand Theft Auto 5 was developed by Rockstar North and published by Rockstar Games. GTA 5 is an incredible open world action adventure game taking place in the city known as ‘Los Santos’. Its release took place in September 2013 for Playstation 3 and Xbox 360 consoles, and November 2014 for Playstation 4 and Xbox One. On April 14, 2004 the game was available for purchase and download on Windows PC. In GTA 5 you will play with three main characters: Franklin Clinton, Michael De Santa and Trevor Philips. Grand Theft Auto 5 for PC also brings the debut of the Rockstar Editor, a powerful suite of creative tools to quickly and easily capture, edit and share game footage from within Grand Theft Auto 5. The Rockstar Editor’s Director Mode allows players the ability to stage their own scenes using prominent story characters, pedestrians, and even animals to bring their vision to life. So don’t wait any longer and join the action right now in Grand Theft Auto 5.

Overview GTA 5 Requirements PC – GTA 5 Can You Run It? 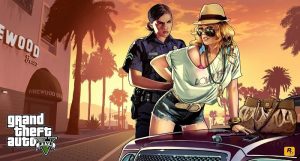 Check if your PC meets the GTA 5 requirements with free, easy-to-use detection tools or enter your system specifications manually. Click the Orange button below to start with the test.