Garry’s Mod is a physics sandbox. In Garrys Mod, there aren’t predefined goals or aims. You spawn objects and weld them together to create your own contraptions – whether that’s a car, a rocket, a catapult or something that doesn’t have a name yet – that’s up to you. You can do it offline, or join the thousands of players who play online each day. The Garry’s Mod community is a tremendous source of content and has added hundreds of unique modes to the game. In Trouble In Terrorist Town, you can be a detective solving an online murder as criminals attempt to cover up their homicides. Be a ball, a plant, a chair, or anything else in Prop Hunt’s elaborate, shape-shifting game of Hide & Seek!

Overview Garry’s Mod System Requirements PC – Can I Run It? 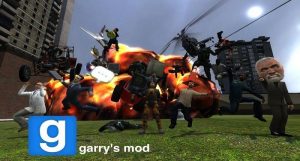 Can You Run It: Garry’s Mod

Check if your PC meets the Garry’s Mod requirements with free, easy-to-use detection tools or enter your system specifications manually. Click the Orange button below to start with the requirements test.