Sea of Thieves is an action-adventure game developed by Rare and published by Microsoft Studios for Windows and Xbox One, released on 20 March 2018. The game allows players to take the role of a pirate sailing the seas of a fantastical world either solo or as part of a crew of up to four players, with gameplay presented from a first-person perspective. The game features both co-operative and player versus player combat, and includes cross-platform play between Xbox One and Windows. Upon release, Sea of Thieves received mixed responses from critics. Critics praised the game’s gameplay and style, with particular focus on the game’s sailing mechanics. However, the majority of critics found the game to be lacking in content, and criticized the full-price tag. Additional criticism was directed towards repetitive quest design and performance issues. Multiple critics were more positive about the state of the game a year after release.

Overview Sea of Thieves System Requirements PC – Can I Run It? 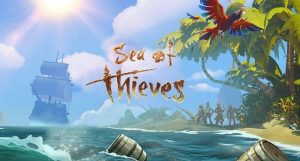 Can You Run It: Sea of Thieves

Check if your PC meets the Sea of Thieves requirements with free, easy-to-use detection tools or enter your system specifications manually. Click the Orange button below to start with the requirements test.